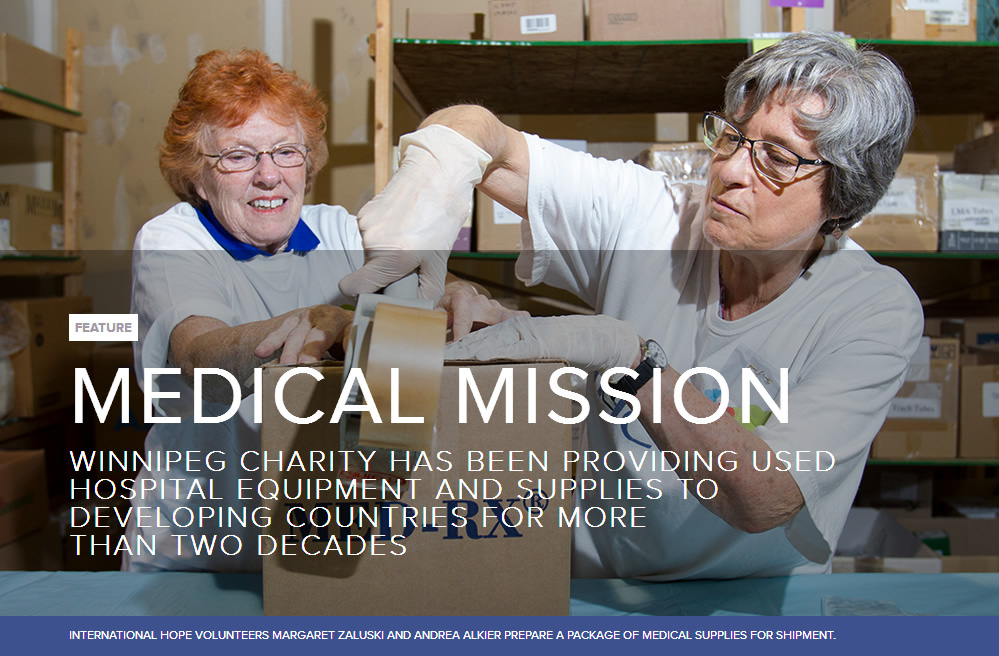 A Winnipeg-based charity has been bringing hope to the world for over 20 years.

Since its humble beginnings in 1997, International HOPE Canada has distributed 800 tonnes of medical supplies and equipment to hospitals and clinics in developing countries.

The organization began with just one person who was determined to make a difference. When Phyllis Reader, a retired operating room nurse, went on a medical mission to Ecuador, she noticed that local health-care workers were using bent, rusted needles. Once she returned to Canada, she began collecting surplus and outdated medical supplies.

“Our beginnings were very, very small. We started off humbly – we operated out of space provided by two churches, with members taking things in their suitcases when they went on missions,” says Pat Rodgers, the charity’s public relations officer.

The charity has grown considerably since then. Today, International HOPE Canada has 91 volunteer members, many of whom are Winnipeg Regional Health Authority retirees.

“We have teachers, tradespeople, engineers, and machinists. We have a lot of retired nurses and one doctor,” says Rodgers, who retired in 2006. “Everyone is doing this free of charge on their own time. No one is being paid in this organization. With our volunteers’ help, we’re able to make sure no usable piece of medical equipment winds up in a landfill.”

Retired social worker Joe Michalchyshyn started volunteering with the charity five years ago after his wife encouraged him. His wife has since passed on, but Michalchyshyn continues to show up every week to help repair wheelchairs.

“It’s very meaningful work. You can see the results, that you’re really helping others,” he says. “We take pictures of us loading the containers, and then we get pictures back of them unloading it, holding big thank-you signs. We get oodles of great thank-you letters.”

Michalchyshyn was particularly touched by the story of a small boy in Africa who used a board with wheels to get around.

“He’d never been off the ground, ever. When he got one of our wheelchairs, he wouldn’t let anyone near it. He wanted to sleep in it,” he says. “The situations in some of the Third World countries are really grim. Our stuff is like gold to them. It does change lives.”

Over 10,000 hours of volunteer labour are needed every year to keep the organization running. Depending on their expertise and skills, volunteers can receive, catalogue, or repair donated equipment and help with administration tasks.

Almost 95 per cent of the charity’s volunteers are retired, but anyone is welcome to join the team. Membership costs five dollars a year.

Lynn Heise, a retired community health nurse, has been volunteering with the organization since its inception.

“It’s only open two days a week, so it’s not a big commitment. The people are really friendly and nice. It’s a welcoming place to volunteer.”

Each year the organization manages to send about eight 40-foot shipping containers packed with supplies to the countries and people who desperately need them. So far this year, containers were shipped to Cambodia, Nigeria, and Ukraine, with Paraguay and Zambia scheduled for the near future. In total, International HOPE has sent 90 containers to 45 different countries. 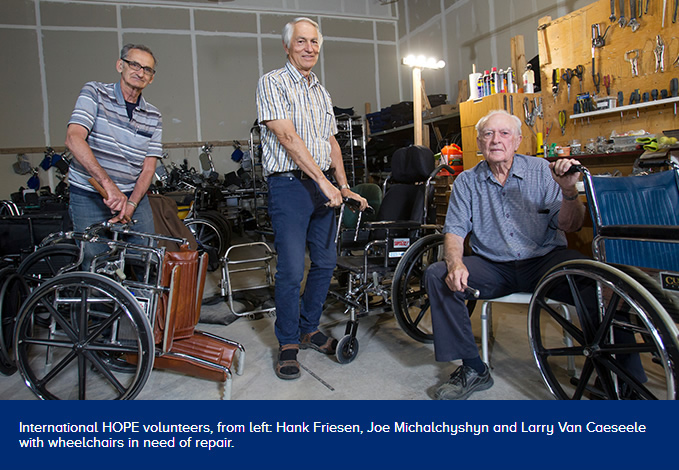 “It’s nice to see what we’ve done has made a difference out there,” says Rodgers. “I think everybody appreciates the fact that this stuff is not ending up in our landfills. We’re not wasting materials in any way. We’re a huge recycler.”

Much of the material donated to International HOPE is considered obsolete, outmoded, or past “best before” dates in Canada, such as crank-type beds that are still usable, but outdated. An unopened box of bandages is considered waste in this country because it’s past an arbitrary “stale” date. But in many parts of the world, throwing out an unopened box of bandages would be unthinkable.

Donations have come to the charity from Ontario, Saskatchewan, Alberta, and all over Manitoba.

Where does the help go?

Check out our map to see where in the world the containers and other supplies are delivered (click on the image to enlarge). 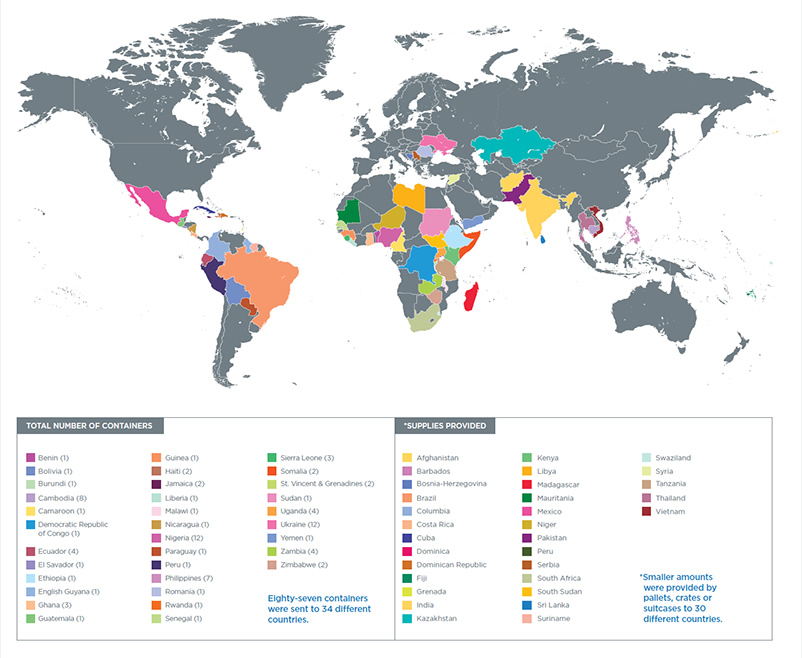 “People come by all the time to get supplies for missions overseas,” Rodgers says. “Everything goes into our inventory until it is needed. Our organization is one of a kind. There’s nothing else like this in the world, certainly nothing like it in Canada.”

The supplies International HOPE sends to developing countries have no value in Canada. But to the recipients – where such items are non-existent or in extremely short supply – they are extremely valuable. It is estimated that a container of donated supplies would have a value of between $500,000 to $800,000 or more, if the items were purchased new.

In the beginning, the charity collected smaller, portable medical supplies people could take with them on international missions: sutures, sponges, and gloves, or small instruments like scalpels and scissors.

But International HOPE’s volunteers soon discovered there were plenty of larger items available for donation, and a considerable need for this equipment in the developing world.

In 2003, the organization was given 200 hospital beds that would otherwise have been disposed of as scrap metal.

“The larger equipment is checked out by our volunteer engineers, and we also rely on volunteers to get the containers loaded,” says Rodgers.

Not every donation the organization receives is usable. The volunteers have had to find ways of safely disposing of hazardous waste.

Filling a container requires quite a bit of communication between International HOPE and the receiving hospital or health department. The receiving organizations have a wish list and the charity will send anything they have available. 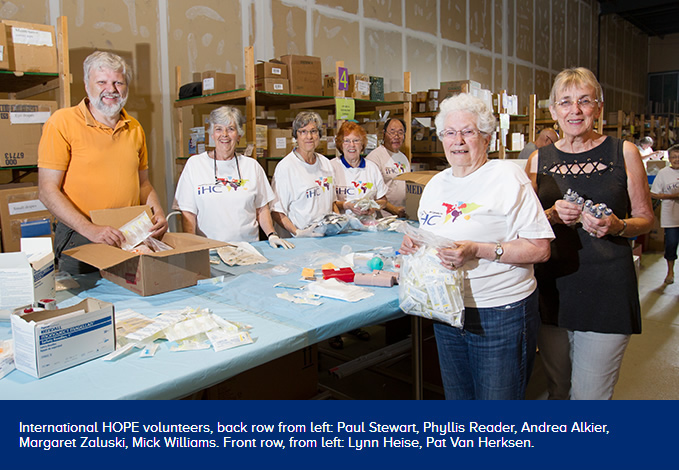 It’s not always easy to let those in need know this service exists, Rodgers adds. International HOPE partners with other international aid organizations to help spread the word.

“We have to get out there in some way to let people in need know we’re here, but slowly, word gets around,” she says. “We also have to abide by the rules of the governments involved, both Canada’s and the receiving country’s.”

Any costs associated with shipping and delivering the containers are the responsibility of the country receiving the supplies. But as the shipping costs can run between $10,000 and $15,000, other charitable organizations often step in and cover the fees.

“The people we donate to have a network themselves,” Rodgers explains, adding that International HOPE has no political, cultural, or religious affiliations.

Members meet twice a week, on Wednesdays and Saturdays.

“Container days happen on Saturday. By 8:30, everybody is in there loading. Container days are great – I just love them,” says Rodgers. “We have the greatest volunteers you could ever imagine. Everything they do for us comes from their heart. We have tons of our own people who come in to help.”

Four of International HOPE’s volunteers have been awarded one of Canada’s highest honours for selfless community service. Phyllis Reader and Sonia Michalyshen received the sovereign medal for volunteers from the Governor General of Canada three years ago, and Roma Maconachie and Val McIntyre received it this year.

“We hope others will come out and join us. We’re always looking for new people,” Rodgers says. “The people involved are fun. They’re easygoing. They enjoy themselves, and they feel useful.”

As for the future, the charity recently moved from the warehouse it has called home for the past 18 years and is looking forward to operating out of a newer space.

“Our plan is to keep doing what we’re doing right now, keep doing a better job every year,” says Rodgers. “It feels good to help people. It’s the right thing to do.”

Holli Moncrieff is a Winnipeg writer.

You can read the whole story on the Wave Magazine website at www.wavemag.ca/2018/07/medical-mission.php

Founded in 1997 and incorporated in 2002, International Hope Canada is a non-profit with charitable status.

IHC gratefully appreciates all the photos donated for use on our website and on this website.  Banner photos are all the property of IHC.  Photos with photographer credits were donated by volunteers and partners. All other photos are used under Creative Commons licensing. Please note: we have made some updates recently, so if a photo credit/attribution is missing, will be correcting that shortly.